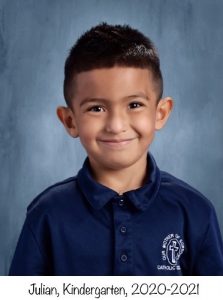 2020 was a challenging year for many, including children, who had their whole world turned upside down and had to adapt to new ways of learning through virtual platforms and new restrictions for in-person schooling.  For Julian Loreto, who began Kindergarten in the midst of the pandemic while simultaneously dealing with the heartbreak of losing a loved one, this past year was especially difficult.  However, the glimmer of hope was the support he found at his parent-selected school, made possible by a scholarship from the AAA Scholarship Foundation.

Julian’s mom, Roxanna, the oldest of six children, grew up in a less privileged community, where her father was the sole financial provider and access to educational options were limited.  However, the importance of education was a focal point in their family and through hard work and determination, she became the first person in her family to attend and graduate from college.  After earning her degree in criminal justice, Roxanna worked for several years in the juvenile courts helping families with adoptions.

A fulfilling career was not the only life goal Roxanna had set for herself; she also had a strong desire to become a mother, a path that would not be easy.  After several miscarriages, Roxanna became pregnant with Julian, only to encounter more obstacles, including the end of her relationship with Julian’s father and a car accident that left her on bed rest. And then when Julian, who Roxanna calls her “firework,” was born on the Fourth of July, he needed to stay in the NICU for a week due to some complications.  Roxanna vowed to do everything she could to provide a good life for her son once they made it through this tumultuous time.

Thankfully, Julian made it out of the NICU and Roxanna has worked tirelessly to keep her promise since then.  When it came time for Julian to start Kindergarten, Roxanna knew how important it was for her to find the right academic setting, even if it meant making additional sacrifices.  Around this same time, a job change led her to a position at Our Mother of Sorrows Catholic School (OMOS) and she saw firsthand how the school would be a perfect fit for Julian.  It was also through OMOS that she learned she would qualify for an AAA scholarship, enabling her to afford the school tuition.

“I felt as a single parent with a limited income, my son’s education should not be limited,” says Roxanna.  “The AAA scholarship allowed my son to have access to the very best education, giving him the tools that will help him achieve academically and lead him to be a happy, successful person.”
Unfortunately, right as Julian was beginning Kindergarten at OMOS in August 2020, tragedy struck.  Roxanna’s father Jose passed away unexpectedly due to arterial plague.  Jose was more than a grandfather to Julian; he served as a father figure and often spent time taking him fishing and teaching him how to fix cars.  The family was beyond heartbroken and Roxanna worried how her father’s passing would impact Julian after an already tough year.  Fortunately, the staff at OMOS took Roxanna and Julian in and cared for them during their time of need, giving them the peace and security they needed after their loss.

“In the world we currently live in, having Julian attend OMOS has been one of the best decisions I have ever made for my son,” Roxanna says.  “I have seen firsthand the behind-the-scenes heroic acts the staff and faculty have done.  During the uncertainty of the pandemic, OMOS has kept the students’ health, academics and knowledge at the forefront.”

Despite all the challenges Julian has faced this year, he is off to a great start in school thanks to the caring staff and advanced curriculum at OMOS.  He loves math and looks forward to homework each day so that he can show off his newly acquired skills.

“The world is always changing, but what doesn’t change is the importance of education,” says Roxanna.  “I hope Julian continues to further his education and is inspired to be the best he can be, while fulfilling his inner strengths and contributing to this changing world.”

While Julian’s positive attitude and determination will undoubtedly help him succeed, Roxanna acknowledges how those who have stepped up to help are playing a crucial role in his achievements.

“Students are able to succeed thanks to the supporters who surround them, such as parents, relatives, teachers, counselors and mentors,” says Roxanna.  “Support also comes in the form of organizations, foundations and individuals who wield their influence and passion to advocate for students on a broader scale.  It is the kind of work that the AAA Scholarship Foundation and its partners are involved in – seeking to make future success possible for all students.  While power comes in numbers, even one supporter can make a life-changing impact on a student.  As a parent and an employee of a school that sees firsthand the impact of these scholarships, I extend my sincere gratitude!”

AAA Scholarship Foundation promotes the advancement of education by administering educational choice programs. The typical AAA Scholarship student is an ethnic minority living with a struggling single parent/caregiver in a high crime community. More than 80 percent of these children are initially awarded AAA scholarships while living in households with annual incomes at or below 200 percent of the federal poverty level. Many are either below grade level, failing at their previous school or both when they first receive a scholarship. Parents, who find their children in these circumstances and are concerned about their future, look for viable options. They seek an atmosphere that challenges their children and will reverse inadequate learning, social patterns and potential lifelong negative impacts. They wish to change their children’s learning environment, acquaintances and the unfortunate predictable outcomes associated with school failure.

Click here for a pdf of this Student Spotlight.