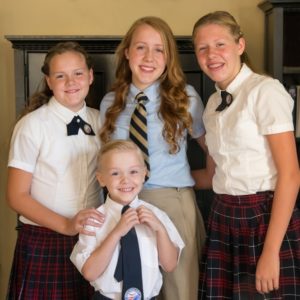 “If you change one child’s life, you have the potential to impact multiple generations,” says Debbie Dixon, a mother of four – all of whom have benefitted from the AAA Scholarship Foundation over the past few years.  The Dixon family is no stranger to the challenges life has thrown their way, but Debbie is confident that the education her children have been able to receive has been a saving grace.

Debbie and her husband Bryan have been married for 22 years, working hard to provide a stable environment for their growing family, which today includes four children – Alena (19), Emeline (16), Lillian (13) and Isaac (8).  Originally from Ohio, the family relocated to Nevada in 2005, when their oldest, Alena, was just starting school.  Both Debbie and Bryan had attended public schools themselves and had every intention of enrolling their daughter in their new neighborhood school.  However, Debbie was shocked to learn that the school they were zoned to attend was overcrowded and that half of the children in Alena’s class were performing below grade level.  Because Alena was on track academically, the harsh truth was that it was unlikely that her learning needs would be met due to so many other students that would need help just to stay afloat.

Fearing that Alena would get lost in this type of environment, Debbie and Bryan decided to send Alena to a local private school, American Heritage Academy, in Henderson. American Heritage Academy provides a low student-to-teacher ratio and a top-notch education, with students from the school consistently testing in the top 10 percent of the nation academically.  Aside from academics, the Dixons liked that the school also focuses on equipping students with leadership skills and inspiring them to become good stewards of their communities.  At the time, Bryan had his own tax service business, and the family could afford the private school tuition for Alena and eventually her younger sisters, Emeline and Lillian.  The school was a wonderful fit and the children were thriving.

However, the family encountered a big hurdle when Debbie was pregnant with her fourth child.  She had major complications during the pregnancy, and doctors even told her that she might need to terminate because her own life was at risk.  After 35 weeks of pregnancy, which included 56 days in the intensive care unit, a healthy baby boy named Isaac was born and only had to spend a minimal amount of time in the NICU.  Debbie, however, had a tough road ahead, undergoing five more surgeries over the next few years.

During this time, Bryan had to take time off from work to care for his four young children as Debbie continued to fight health battles.  Medical bills piled up, as their finances dwindled.  Bryan eventually had to close his business and find a job elsewhere that would provide the family with more substantial healthcare coverage.

With finances tight, it became clear that they would no longer be able to afford to send their children to American Heritage Academy.  However, a glimmer of hope appeared when they learned about the scholarships available from AAA Scholarship Foundation.

“I thought we were going to lose it all,” says Debbie. “Our family had been through so much already. The thought of taking them out of a school that had been their constant stability through all this turmoil crushed me.  But when we received the scholarships from AAA, a huge burden was lifted and I knew my kids were going to be okay.”

Now a few years since receiving the AAA Scholarships, the Dixon children are doing more than okay.  Alena, 19, graduated as salutatorian from American Heritage Academy in 2018 and is currently studying to be a speech pathologist at Brigham Young University in Provo, Utah, which she is attending on an academic scholarship.  Emeline, 16, has also excelled in school and sports, even earning a scholarship for a club volleyball team.  She is especially gifted in math, and also placed first in the local 2019 Veterans of Foreign Wars Voice of Democracy Contest, an accomplishment she accredits to the school’s well-rounded academic programs that include a focus on leadership and patriotism skills.  Her love of volleyball initiated her transition over to the local public high school, where she is on the varsity volleyball team and is participating in the dual-enrollment program at the local college, thanks to the solid educational foundation she received at American Heritage.

The youngest of the Dixon children continue to thrive at American Heritage.  Lillian, 13, is now in the eighth grade and has developed a love for history and theater.  Isaac, 8, who was already reading Shakespeare in his third-grade class, has become a top performer academically. His recent standardized test indicates that he is performing higher than 75 percent of students nationally in his grade overall, and 99 percent higher than others in math.  He has also enjoyed learning to play the piano.

No doubt, Debbie and Bryan are proud parents for all that their children have accomplished thus far.  And they are grateful that their family was given a helping hand during some of the most trying times in their lives.

“I cannot put into words what this scholarship program means to us,” says Debbie.  “We realize what a gift it is to have these scholarships available for our family when we needed it the most.  Because of the AAA Scholarship Foundation and its donors, my children see that there is good in this world and people who care.”

The AAA Scholarship Foundation awards scholarships solely to qualifying low-income, disabled and displaced students. The typical AAA Scholarship student is an ethnic minority living with a struggling single parent/caregiver in a high crime community. More than 80 percent of AAA scholarships are distributed to children at or below 200 percent of poverty. Many children are either below grade level, failing at their previous school or both when they receive a scholarship. Parents, who find their children in these circumstances and are concerned about their future, look for viable options. They seek an atmosphere that challenges their child and will reverse inadequate learning, social patterns and the potential lifelong negative impact. They wish to change their child’s learning environment, acquaintances and the unfortunate predictable outcomes associated with school failure.

Click here for a pdf of this student spotlight.