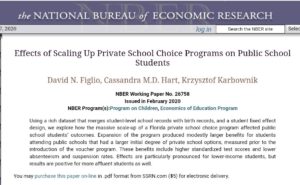 This study specifically sought to find out what happened to the students who remained in public schools as others around them participated in scholarship programs that allowed them to attend private schools. It notes that, as of 2019, there were 29 states with either voucher (tuition & fees funded directly by the government) or scholarship (tuition & fee funded by private donations) programs in place.

The researchers focused on the Florida Tax Credit (FTC) Scholarship Program (disclosure: AAA is an administrator of the FTC program) as it is the largest of its kind in the United States and has a wealth of student-level data (identity-redacted) – both within the FTC program and the Public School system.

The results indicate that public school students living in households with economic-disadvantages and parents with lower education levels were the most positively affected by this exposure, showing lower levels of suspensions and absences, and higher standardized test scores in reading and math. Even those students from higher socioeconomic backgrounds were positively affected, just to a lesser degree.

The researchers find many reasons for the results – from higher competitive pressure levels to changes in resources received by the public schools. Ultimately, the fact remains that the benefits of school choice are wide-ranging and help many more students than just those directly participating in the program.

If you’d like to find out more about the Florida Tax Credit Scholarship program or any of the other scholarships we administer, we welcome you to contact us!