**UPDATE** Unfortunately, on Thursday, October 7, 2021, the Nevada Supreme Court ruled against Nevada parents, schools, and taxpayers by allowing AB 458 to stand. Although this decision was disappointing, we will not give up our mission to help families with modest means afford to send their children to the educational settings that best fit their learning needs.

We pledge to continue to ask legislators to vote in-favor of allowing the contribution “cap” for the Nevada Educational Choice Scholarship Program to increase annually so that we can once again add new students. We ask that all interested parties do the same by letting your elected officials know what a scholarship would mean to you and to your family. Here is a link if you need to look up the name of your Nevada elected officials. A short email or phone call to one of more could make a big difference in that effort. Thank you!

On Thursday, May 13, 2021, the Nevada Supreme Court ruled in favor of Nevada’s taxpayers, stating that “[b]ased on the plain language of the supermajority provision, we conclude that it applies to the subject bills [SB 551 and SB 542] because they create, generate, or increase public revenue. Because the bills did not pass by a two-thirds majority in the Senate, those portions of the bills that would require a supermajority vote are unconstitutional.” The Justices went on to state, “[a]nd, by using the word ‘any,’ the provision has broad application and applies to all bills that create, generate, or increase the public revenue at any time.” 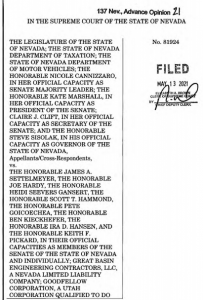 The first page of the Nevada Supreme Court decision 21-13709

We wholeheartedly agree with their opinion! So much so that we joined with Nevada parents, schools, and business taxpayers to ask the Institute for Justice to help us file a lawsuit against AB 458 arguing that it is also unconstitutional because it has the same result as both SB 551 and SB 542: it is a bill that increases public revenue but did not pass by a two-thirds majority in the Senate!

The two cases are remarkably similar in that, but for these bills, the state would not have received increased revenue. The details of the cases are slightly different in that AB 458 removed the automatic ten percent annual increase in modified business tax (MBT) credits available to Nevada employers who donate to eligible non-profits like AAA Scholarship Foundation to fund the Nevada Educational Choice Scholarship Program, whereas SB 551 and SB 542 removed the sunsetting of an increase in the MBT tax rate and a DMV fee, respectively.

We applaud the Nevada Supreme Court’s reasoning in its concise and accurate decision finding both SB 551 and SB 542 unconstitutional. It would defy all logic if it did not use that exact same reasoning to find AB 458 unconstitutional as well.

So we have to ask the Nevada Supreme Court Justices, will you rule in favor of Nevada’s taxpayers again this month?