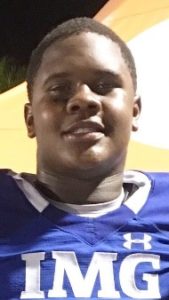 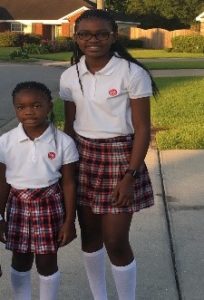 Raised in a household with limited economic means, Monik Brinson experienced first-hand how an educational setting can profoundly impact a child. When the day came for her to be a parent, Monik vowed that she would do whatever it took, and work as hard as she possibly could, to send her children to a school that would have a positive impact on their academic careers. After six years of being a part of the AAA Scholarship Foundation family, she has been able to do just that and more.

As a single mother, Monik Brinson works tirelessly to keep food on the table and to provide her children with the necessities – especially a good education. She never wanted the neighborhood they lived in to determine the type of education they should receive, particularly when it came to her son, Warren.

Even at a young age, she could tell that her son was gifted. Whether it was academics or athletics, he could do just about anything he set his mind to. As Warren was gearing up to attend middle school, Monik couldn’t help but be fearful of the crowd that he could unknowingly get caught up in. She knew she couldn’t protect her son from everything, but she could at least try. Monik didn’t know where to send her son, let alone how she was going to be able to afford it. Most of the schools that would help Warren acknowledge his academic and athletic gifts were private schools. As you can imagine, Monik was in a predicament.

One afternoon, Monik was chatting with a family member and they got onto the subject of Warren attending middle school. Monik was visibly concerned for her son – she knew how easy it was to be swayed by your peers. Given their current household income situation, it was simply not possible to send her son to a different school, regardless of how much she wanted to. That’s when she was informed about the AAA Scholarship Foundation. Monik had tons of questions, as any parent would, such as how does the program work, would their family qualify for a scholarship, and so on. Her relative encouraged her to stop focusing on the “what-ifs” and to just apply. So, she did exactly that. Weeks went by and then one day Monik received a sizable envelope in the mail, with the return address reading “AAA Scholarship Foundation.” As she ripped open the envelope, she couldn’t read past “Congra….” before she was jumping for joy.

When researching schools in their district, Monik came across one that seemed to stand out from the rest – Savannah Christian Prep. Monik planned a visit and was blown away by the school’s loving environment. Students were required to wear uniforms and Monik respected this policy believing that regardless of where or how your child was raised, everyone looked the same. It helped eliminate the idea that you should be treated a certain way based on your clothing. Another added benefit was that the school was made up of many nationalities and students treated each other with respect, regardless of the color of their skin. “These students and administrators don’t see color at this school, they just see love,” says Monik.

Adjusting to a new environment is inevitably difficult. While Warren was grateful to be attending a new school, he didn’t have the “easiest” transition period. Monik was giddy every time Warren would arrive home from school, however, Warren did not mimic her same excitement. Warren didn’t want to admit to it, but his fellow peers weren’t as welcoming as he’d hoped they’d be. He didn’t go into too much detail, but he did confide in his mother that he felt that he was being peer-pressured by his classmates. Monik had a zero tolerance for any form of bullying, so she immediately took matters into her own hands and went straight to the school to address the situation. Monik was pleasantly surprised by how apologetic they were. They assured her that it would never happen again. And thankfully, it didn’t! Warren was able to enjoy his parent-selected school and began to flourish both as a student and an athlete. Due to the countless hours of work he put into his academics and athletics, Warren was the only student selected out of Chatham County to attend the prestigious IMG Academy for football! Warren and Monik are both very aware that if it wasn’t for the AAA Scholarship Foundation, Warren never would’ve received a life-changing opportunity such as this one.

Because Monik saw such an incredible change in her son at Savannah Christian Prep, she wanted her two daughters, Caroline and Taylor, to share the same experience. The private school setting had a huge impact on Taylor specifically. Taylor had more of a challenging time in the classroom, but since the school offered both before- and after-school tutoring, she was able to receive one-on-one attention from her teachers which helped her make high honor roll! She enjoys art and science and even joined the basketball team where she was nominated for most valuable player in her first season. Monik’s youngest child, Caroline, also made high honor roll. Caroline loves to read, and Monik jokes that there must be “something in the water” because Caroline had never played soccer prior to joining the team but scored a total of four goals in her very first game! Monik is proud of everything that her children have accomplished, academically and athletically, but most importantly she just loves to see them happy.

“The AAA Scholarship Foundation has had a huge impact on my family,” says Monik Brinson. “I will do anything to help publicize this organization and help other families to receive scholarships. I really appreciate everything you’ve done and continue to do.”

About AAA Scholarship Foundation
The AAA Scholarship Foundation awards scholarships solely to qualifying low-income, disabled and/or displaced students. The typical AAA Scholarship student is an ethnic minority living with a struggling single parent/caregiver in a high crime community. More than 90.6 percent of AAA scholarships are distributed to children at or below 200 percent of poverty. Many children are either below grade level, failing at their previous school or both when they receive a scholarship. Parents, who find their children in these circumstances and are concerned about their future, look for viable options. They seek an atmosphere that challenges their child and will reverse inadequate learning, social patterns and the potential lifelong negative impact. They wish to change their child’s learning environment, acquaintances and the unfortunate predictable outcomes associated with school failure.

Click here for a pdf of this Student Spotlight.